/ english version: about the work

AHORA. A song in the Hypertemporal Surface

H3 AHORA. A song in the Hypertemporal Surface.

Ahora is an interactive song, composed and installed in the Hypertemporal Surface. As temporal solids, its sounds exist potentially unfolded on the floor waiting for someone to make them sound through his path.
The Hypertemporal Surface is a software environment developed for musical composition in space. It allows to “install sounds” in space. In other words, it lets us map time into space. As every moment of the original duration of sounds is anchored to a specific spatial coordinate, moving through space is literally moving through time. Whoever walks inside this room evokes, in a particular way, the potential times (lenghts/span?) of the composition; the song is rewritten with every new path.
Ahora, as the compositional environment that hosts it, proposes a reflection about the relationship between time and space, about the idea of all times coexisting simultaneously in the same plane, and that it is the observer who updates them, bringing order and meaning.
This work is based on a spatial composition principle. The distribution in space of four sound layers, each one belonging to a speaker, sets up the interaction possibilities for this musical piece. The position of the observer in the room controls a personal time cursor for all the sounds. If the viewer approaches the speaker, the volume rises and the instants that he hears depend on the angular position. If he stands still, time stops.
Only by walking through the installation it is possible to know the immanent temporality of each sound. Only the one who walks through the Surface is capable of revealing, with his ears, the spatial morphology of these sounds created by Operadora, our musical project.

AHORA has been awarded with an Honorary Mention in PRIX ARS ELECTRONICA 2013. 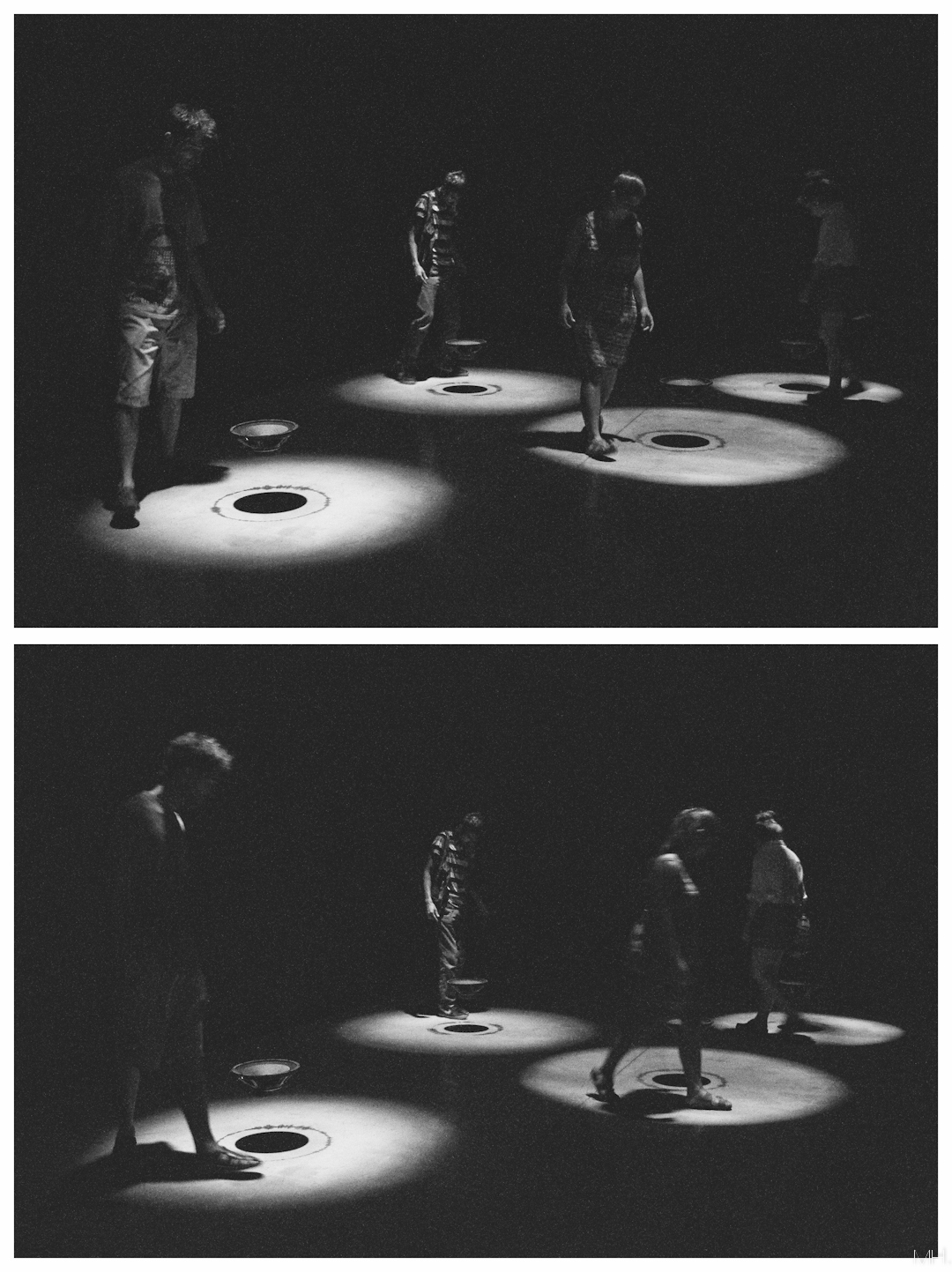 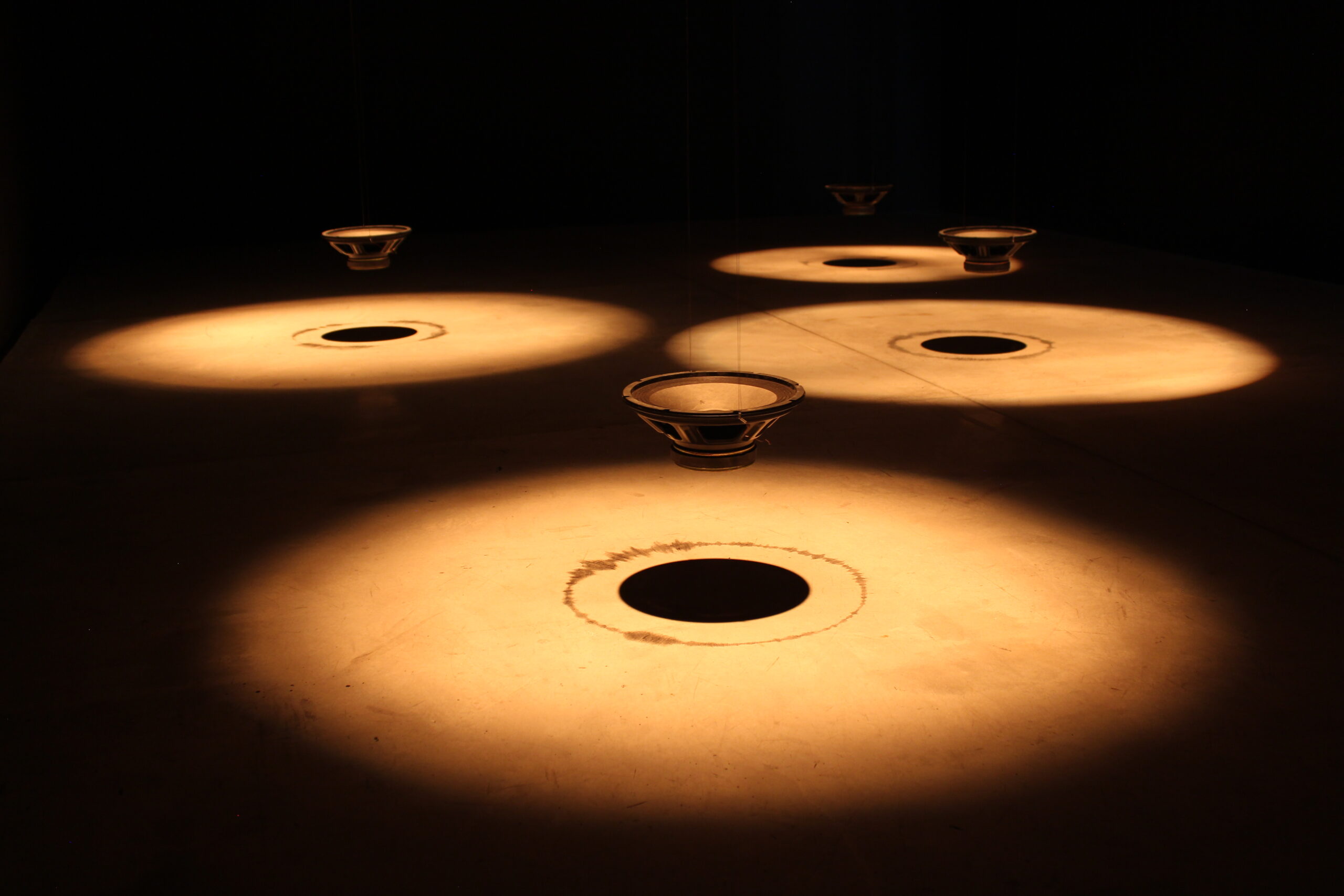 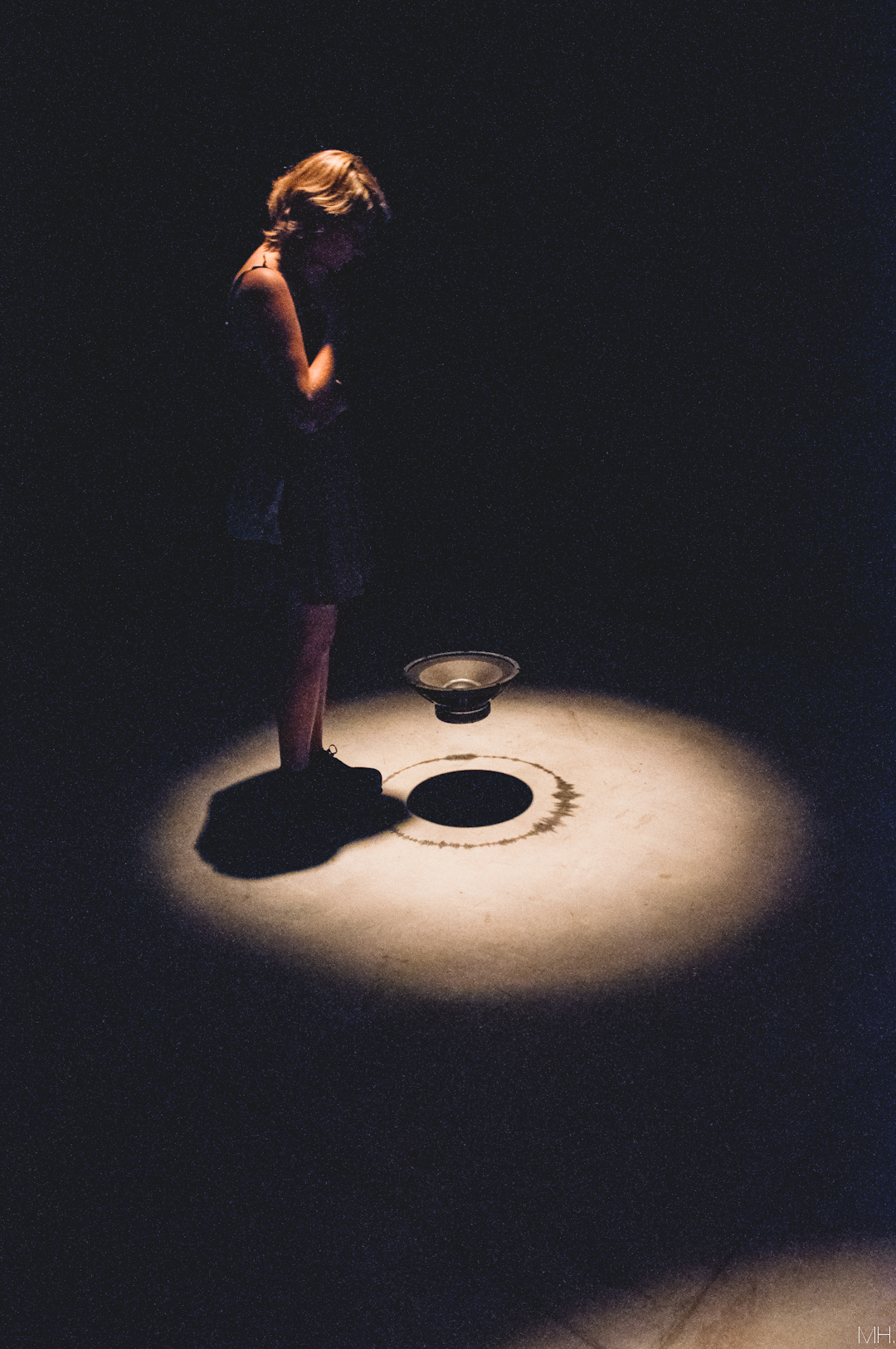 Ahora is an interactive song composed and installed in the Hypertemporal Surface, an environment developed for time-to-space mapping. The piece has four sound layers whose durations are anchored to spatial coordinates, unfolded around the loudspeakers, as shown by the drawings in the floor. Ahora proposes a reflection about the idea of many times coexisting and interacting simultaneously to create a singular moment

The Hypertemporal Surface was initially conceived as an environment for the compositional exploration of the time-space. Built in PureData, this interface is based on the combination of Pierre (programmed by Hernán Kerlleñevich) and a space simulator that receives information from the sensors.

The sensing system consists of two Kinects that observe the space from a zenithal point of view, and detect the presence and movement of the public. The tracking software, based on CCV, sends those positions to Pierre, allowing multiple viewers to access simultaneously even in different moments of the same sound.

Pierre re-synthesizes every sound by implementing a multiple-instance phase-vocoder for each one. This allows the exploration of sounds as a succession of very short time frames slightly overlapped, which can be visited either statically or dynamically. The position of the user brings to the physical world the spectral information of an instant in a continuous flow. If he moves between frames, he can navigate the time at variables speeds and directions.

The listener position information is sent to each sound in Pierre, mapping the spatial position to the temporal position with configurable volume curves and interaction zones. In the hall each sound is reproduced through a particular speaker hanging from the ceiling. There are four speakers in this version of the piece, each of them having a visual correlate: the waveform drawn on the floor in a time-orbit fashion. 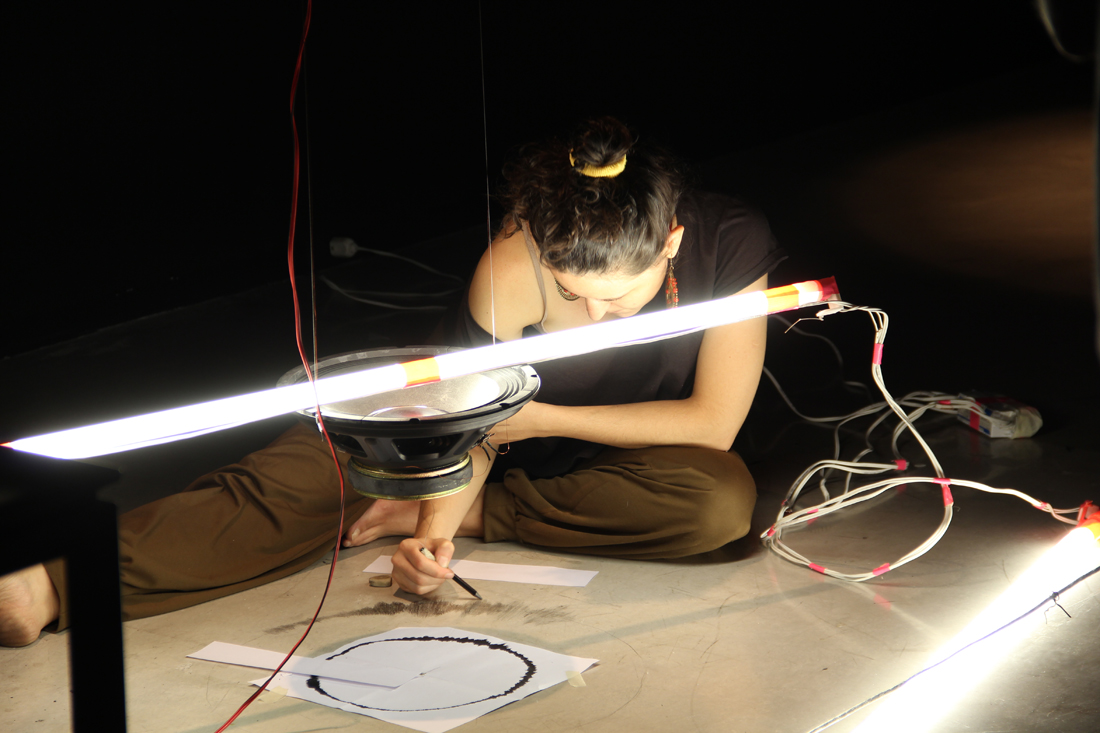 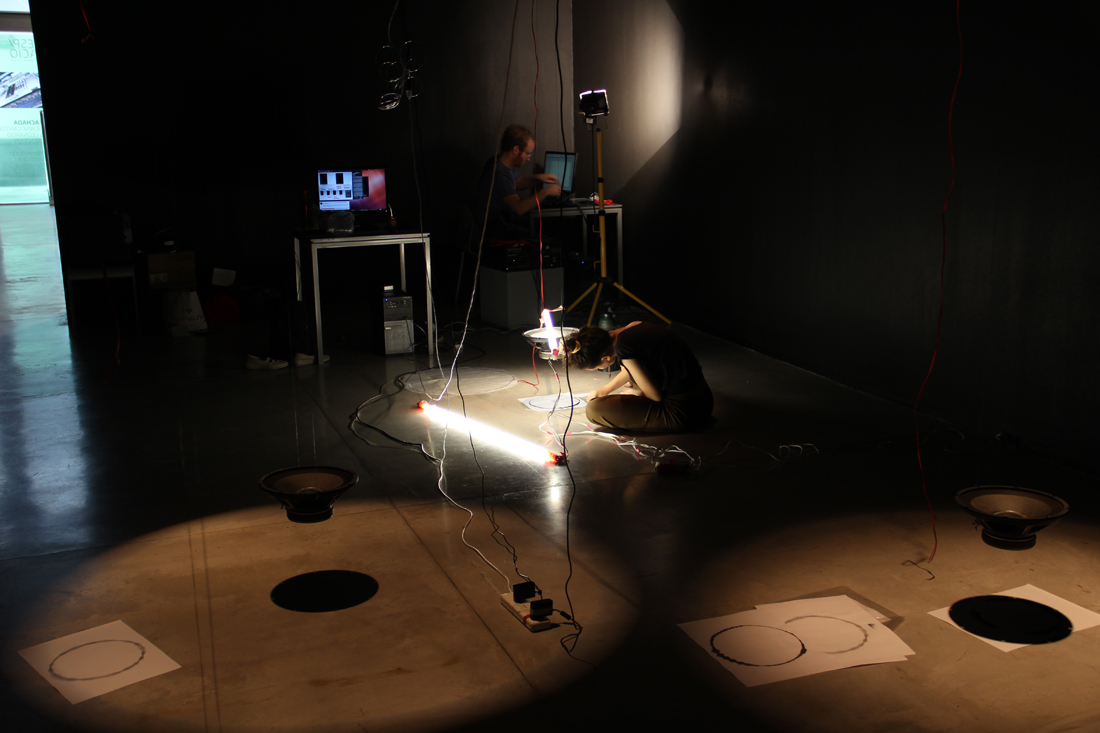 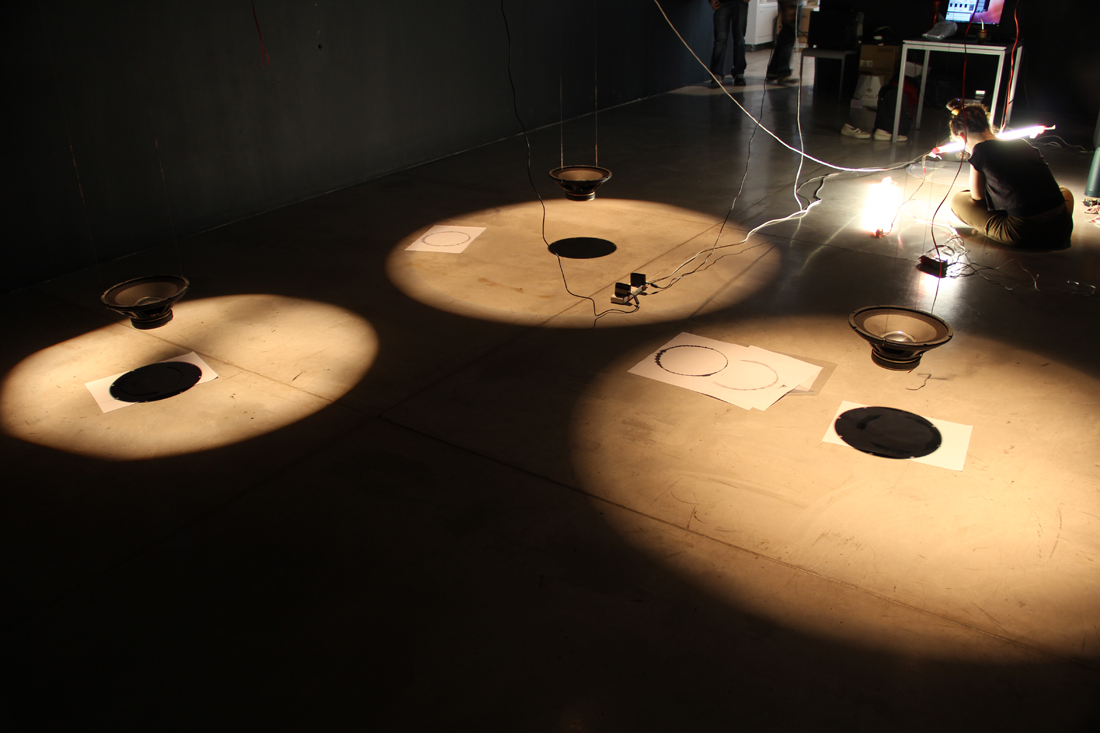 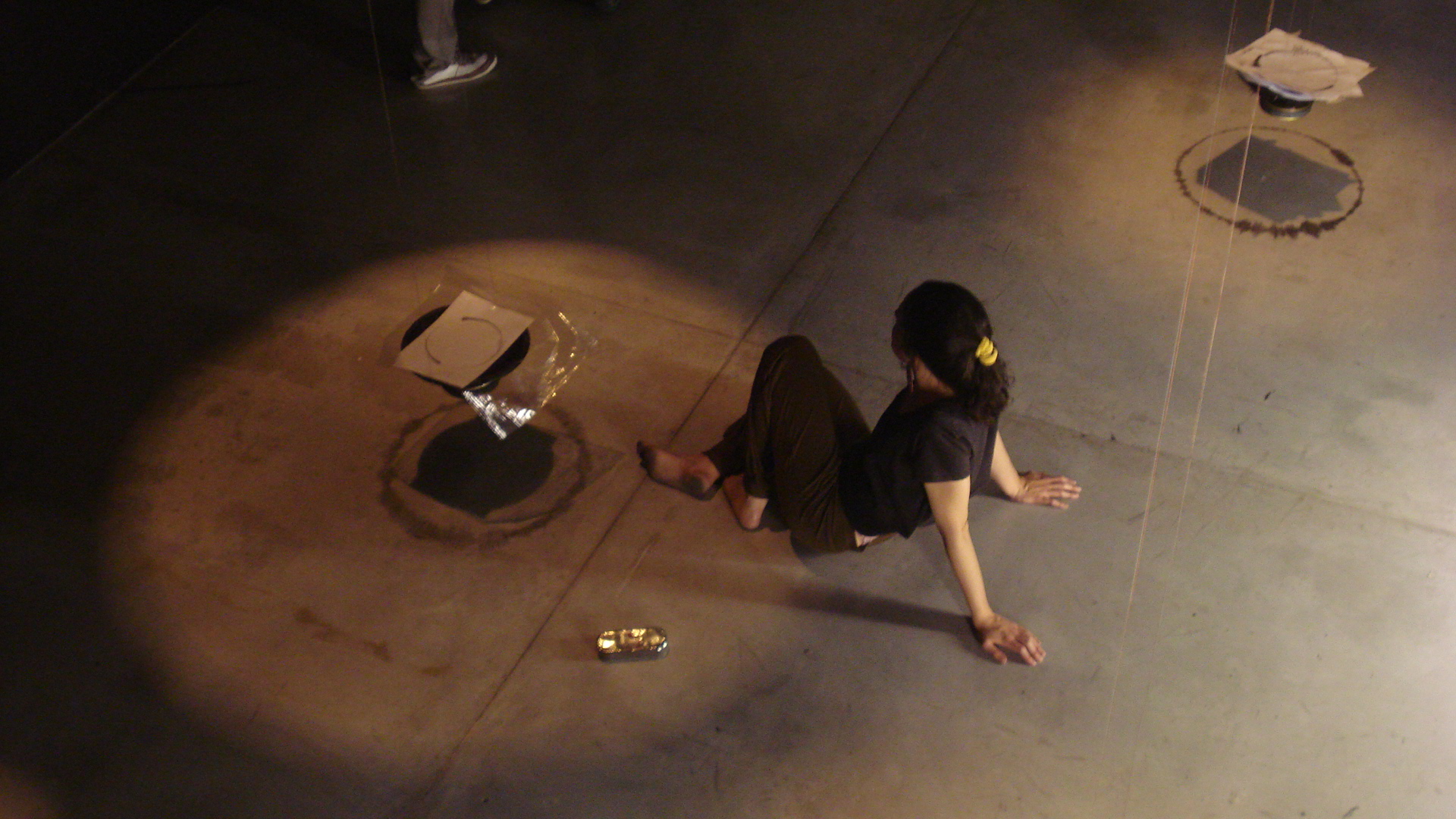 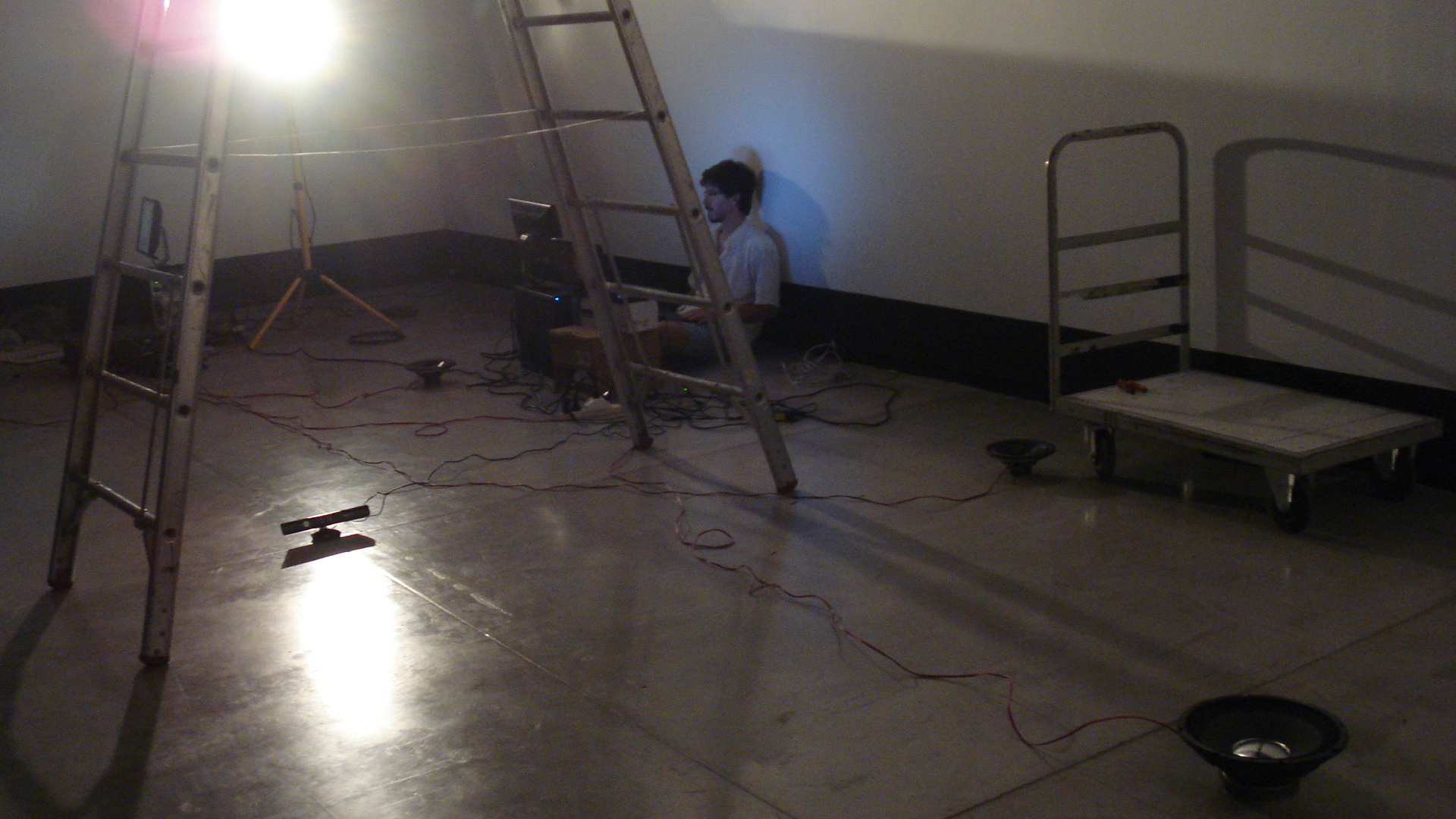 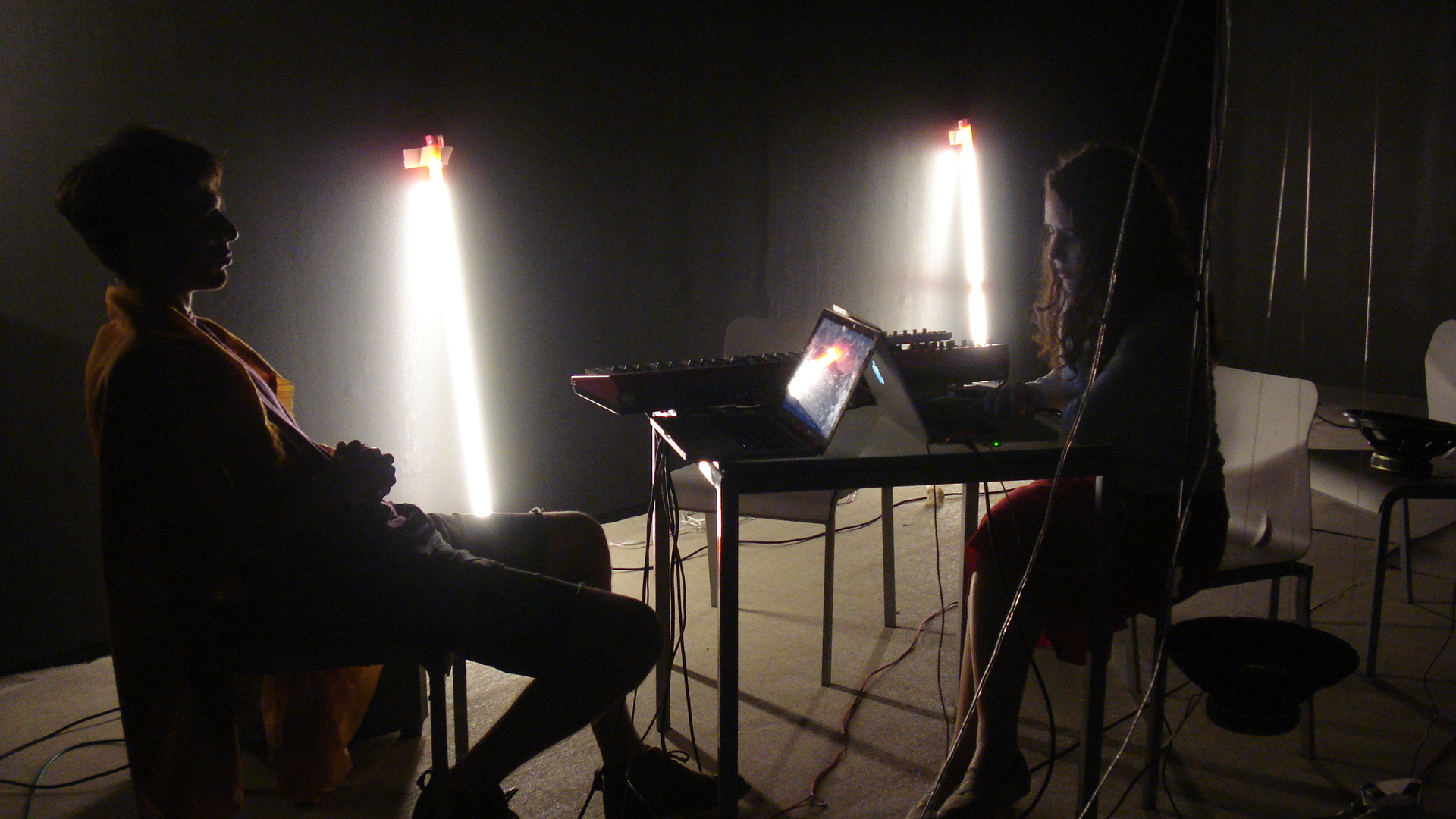 // One afternoon at Espacio Fundación Telefónica,.You can listen to people performing the installation, interacting with it. 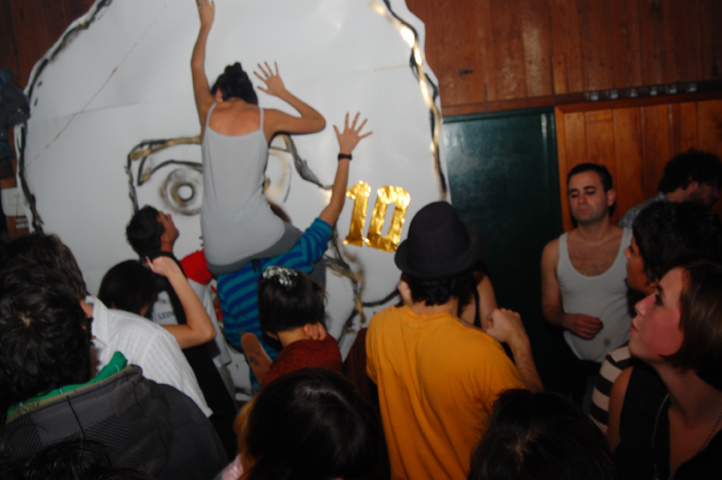 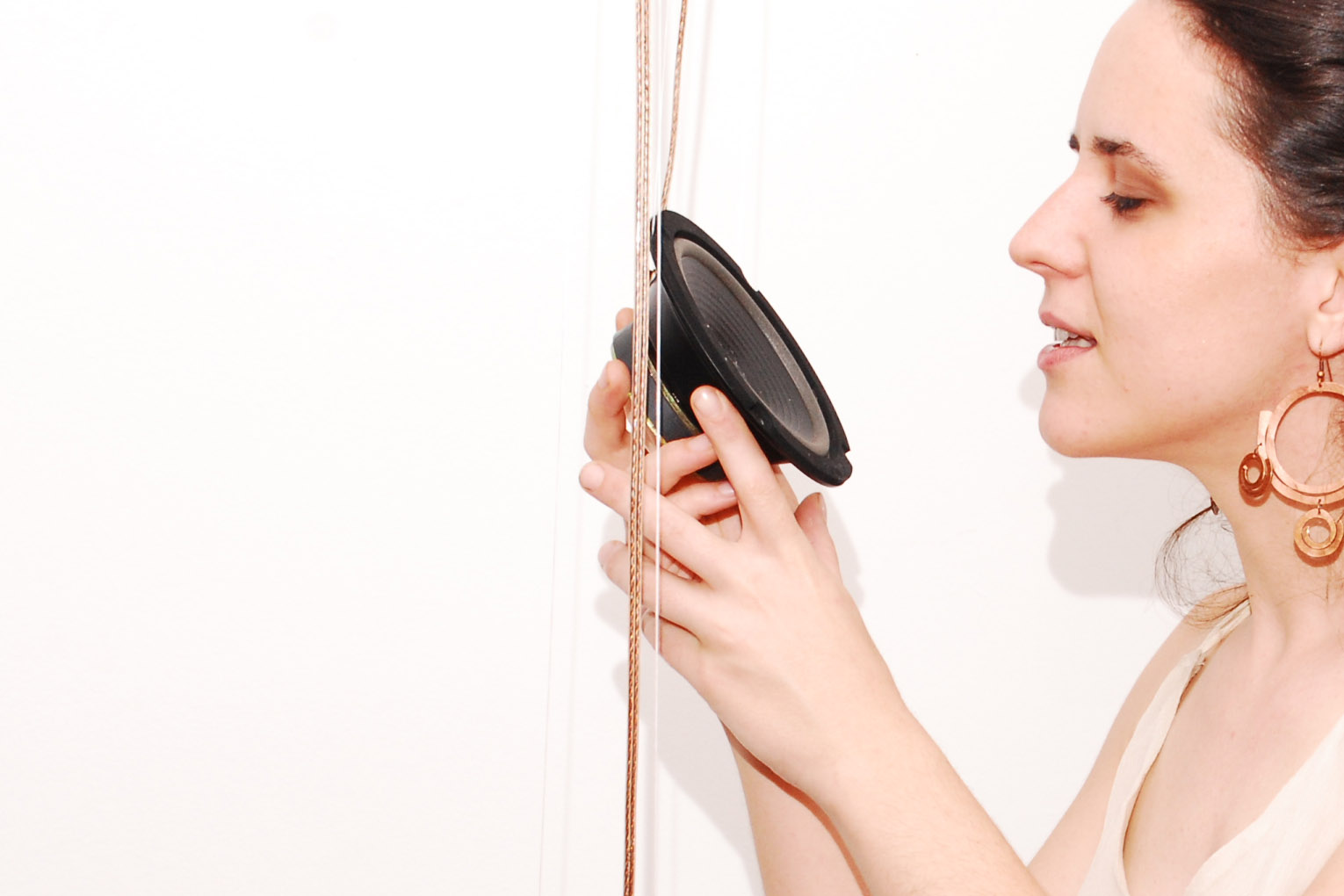 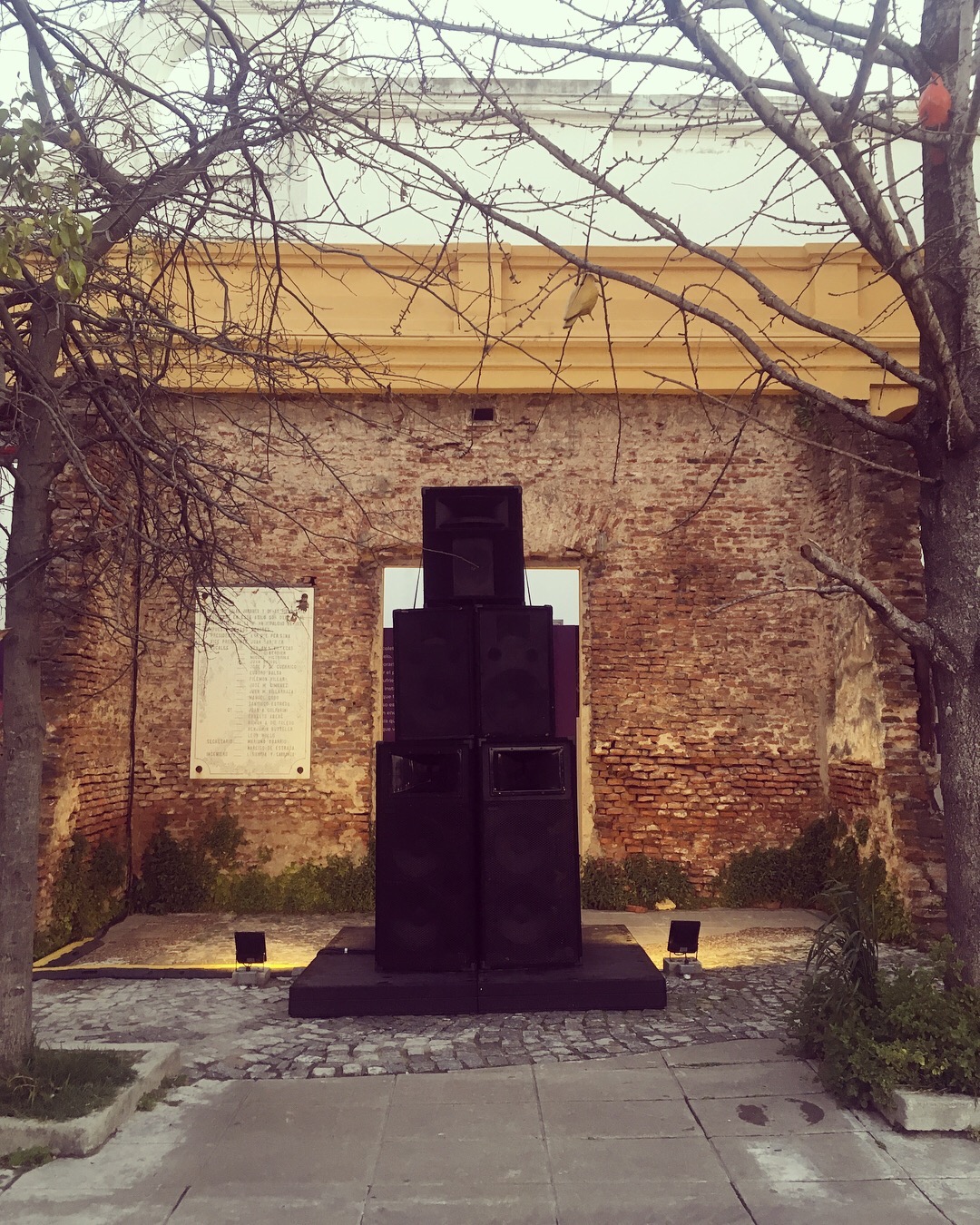 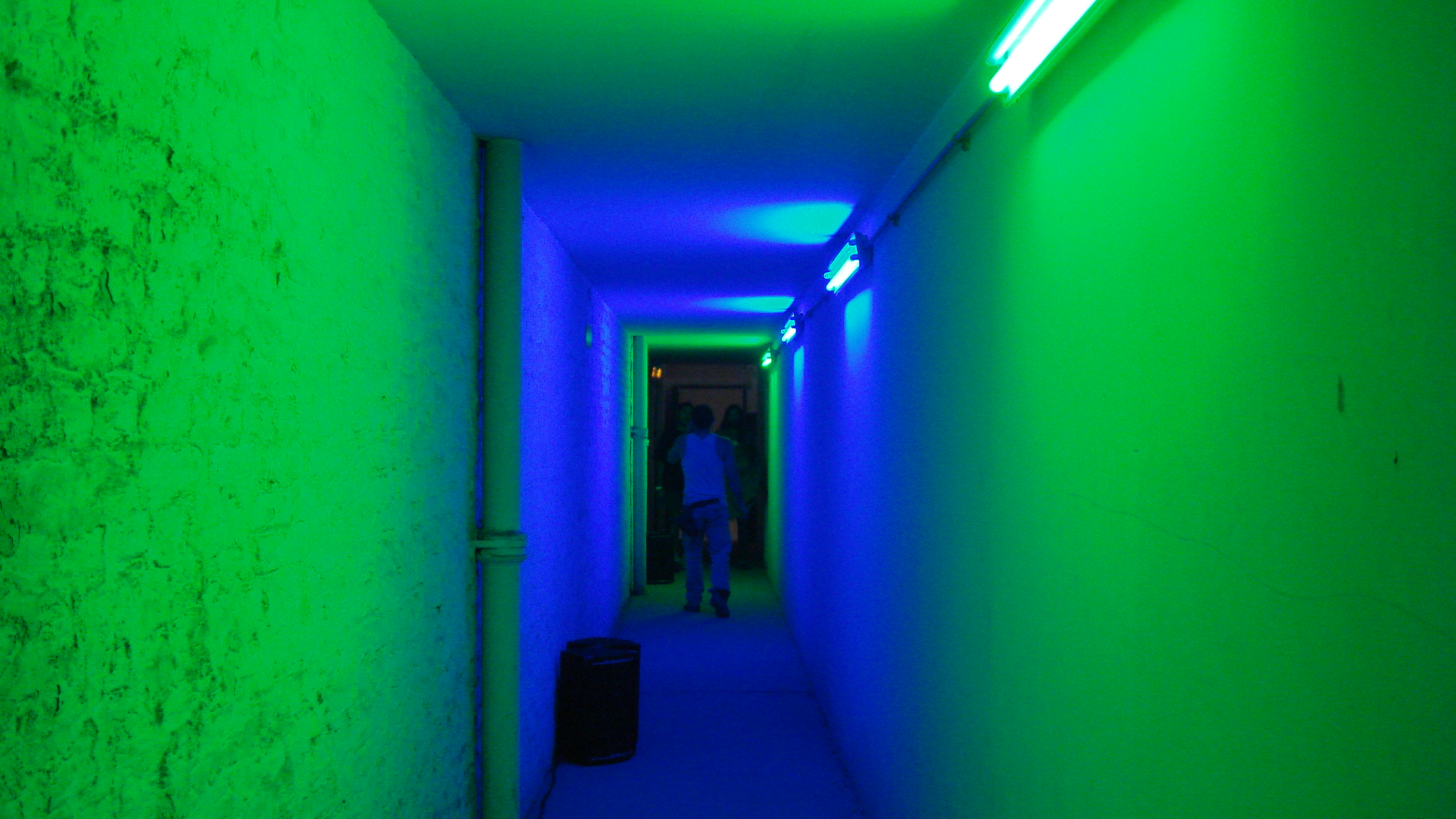 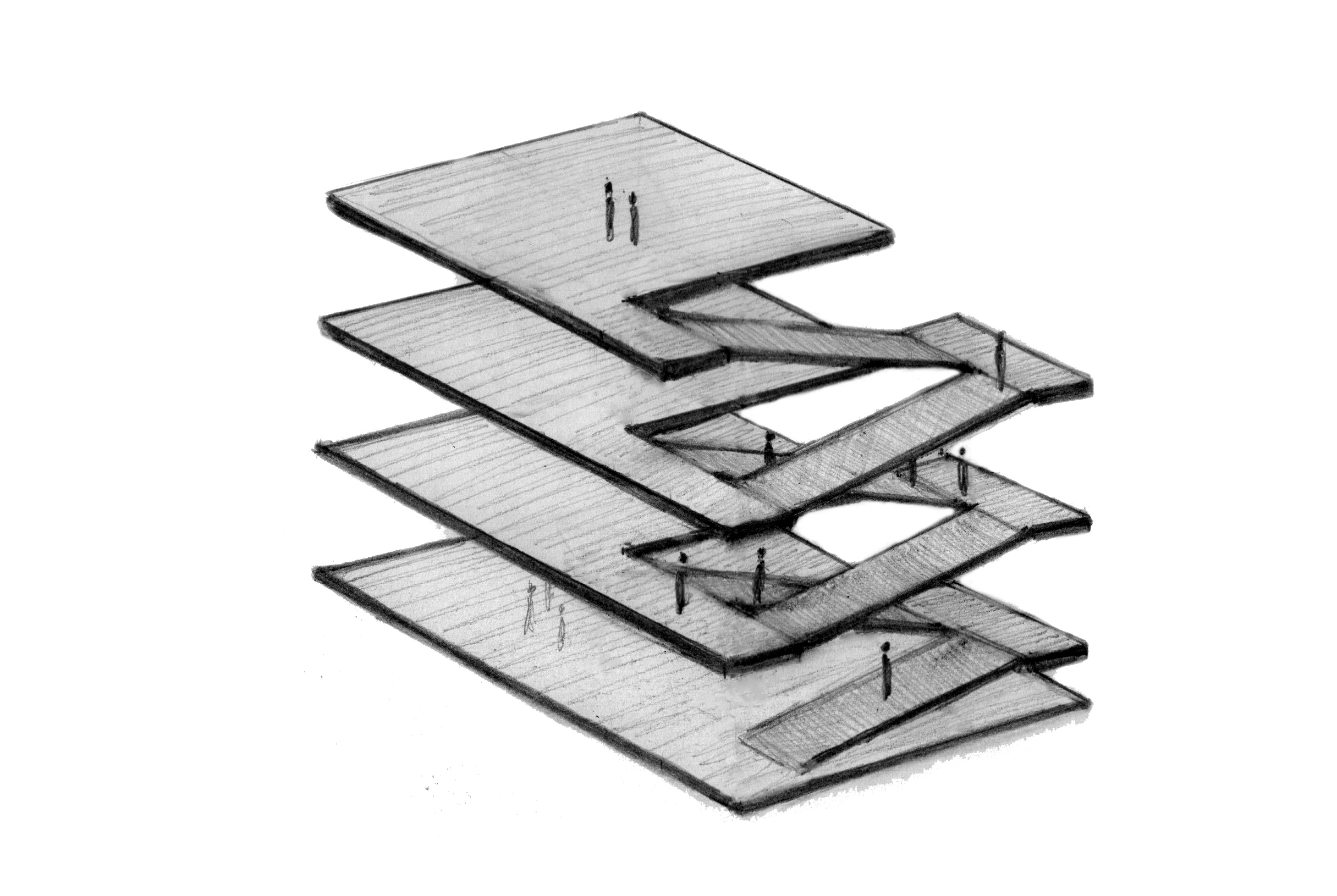